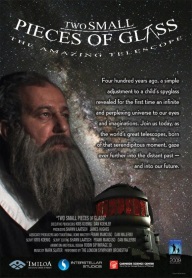 Two Small Pieces of Glass - The Amazing Telescope" show follows two students as they interact with a female astronomer at a local star party. Along the way, the students learn the history of the telescope from Galileo’s modifications to a child’s spyglass — using two small pieces of glass — to the launch of NASA’s Hubble Space Telescope and the future of astronomy. Aiming to engage and appeal to audiences of all ages, the show explores the wonder and discovery made by astronomers throughout the last 400 years.

Imiloa Astronomy Center, Buhl Planetarium at the Carnegie Science Center, and Interstellar Studios partnered on this program which was produced in 2009. Mirage IIID provided the computer graphics, animations, and compositing for the program. The soundtrack was recorded by the London Symphony Orchestra.