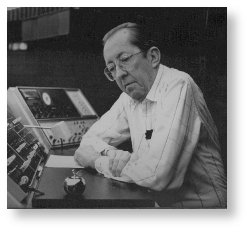 James Edward (Ed) Dooley, Jr. was born on May 25, 1942 in Newton, North Carolina and was the son of Margaret Lillian and James E. Dooley, Sr. He died April 4, 2000 at the Medical University of South Carolina in Charleston, SC at the age of 57.

Ed's Annual Reports characterized his teaching as "excellent" and "outstanding." Recognition for the high quality of his teaching is not confined to FMU. In 1994, he received the Wellman Industries - WBTW Golden Apple Award for Teaching Excellence. He was the first college teacher to receive the Golden Apple Award.

Since the opening of the Planetarium in 1978, he developed numerous shows and uses for the Planetarium. In addition to teaching the University courses in astronomy in the facility, he prepared and presented private shows for school groups and organizations and presented public shows two Sundays per month. The total number of people reached through his outreach service activities exceeds 180,000, and contributed immeasurably to public education and awareness. The programs, which Ed wrote and delivered live, were intended for school and family audiences. He involved his own family, wife Marilyn and son Craig, in the operation of the Sunday public programs. The annual Christmas program, "The Christmas Star," became a traditional way that many families in the area started the celebration of this holiday season.

Utilizing the resources of the Cauthen Educational Media Center, Ed created and taped an astronomy program called SKYWATCH. The first episode aired on WBTW-TV, (Channel 13) the CBS outlet in Florence on October 20, 1978 and the series ran until October 8, 1988. In all, 518 programs were prepared which introduced the viewing public to constellations, comets, eclipse viewing techniques and safety, telescopes and the basic concepts of astronomy.

Ed created an Internet web site for the Francis Marion astronomy program, which includes information about our facilities and schedules of events, a page for questions and answers, links to other sites, and a monthly astronomy lesson. He received the StudyWeb Excellence Award for the planetarium's website, which he maintained. StudyWeb is on the the Internet's premier sites for educational resources for students and teachers. The FMU planetarium website was selected as a featured site in StudyWeb as one of the best educational resources on the web.

Francis Marion has a quality observatory built in 1982, at which Ed held viewing sessions for both his students and the general public. Many people saw Halley's Comet at its return in 1986, as well as became more intimately acquainted with the planets, comets, satellites, and deep space objects during visits to the Observatory. He was presented a key to the city of Florence in 1987 for providing public access to the Francs Marion University Observatory for the viewing of Halley's Comet.

Ed was a member of the American Chemical Society, South Carolina Academy of Science, International Planetarium Society, International Dark Sky Association, and Phi Kappa Phi. He was a member of Highland Park Methodist Church. He also worked with the Florence Cub Scouts for 9 years. Ed received the District Award of Merit for his service to Pee Dee Area scouting.

Since the founding of Francis Marion University, many individuals have made significant contributions through the development of new programs and providing quality instruction in the classroom. Ed Dooley was one of those pioneers who contributed significantly to shaping our future. He developed the numerous outreach programs provided through the Planetarium and created the first academic offering in astronomy. The design of the Observatory and the implementation of programs to serve the community are a credit to his expertise. He had an exemplary record of teaching, research and creative activities, and professional and public service. Ed was gifted in relating the complex issues of astronomy to the layman and adjusting his Planetarium and Observatory presentations to the age and language abilities of his audience. He loved the one-on-one interaction with students studying Chemistry. Today we celebrate and recognize his life as a scholar and teacher. It can be said that Ed was a true scholar.