When Professor Mattox arrived at FMU in August 2000, he found that the Observatory was plagued by glare from campus lighting in the vicinity. He immediately took steps to improve this situation.

The Observatory is located next to a baseball field. 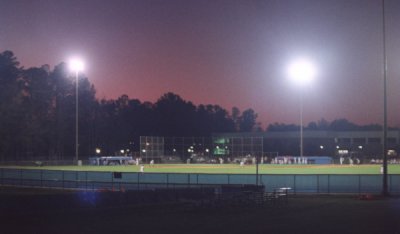 It is not practical to shield these lights. Fortunately they are not often used. We simply cannot do astronomy (except with bright objects) when these lights are on. A less substantial problem was the lighting for the FMU tennis courts about 500 meters away. We put up a sign reminding players to turn the tennis court lights off when they finish if no other players are on the court. That helped.

A sidewalk about 300 meters away was lit with mercury-vapor globe-lamps that created a tremendous amount of glare. These fixtures were replaced with total cutoff sodium vapor fixtures.

An example of a total cutoff fixture is shown above. These fixtures don't produce glare because the light is totally cutoff when seen from the side. The light is cast only downward where it is needed.

This photo was taken after all but the last of the globe lamps were replaced. 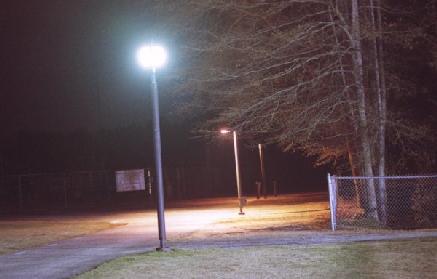 The old globe lamp is closest. Two of the new cutoff fixtures are apparent beyond it. The Observatory is about 300 meters behind the globe lamp. For this viewing angle, some light is apparent coming from the lamp of the first new lamp, while the second new lamp is totally cutoff. Light is only apparent on the pole and on the ground. Notice how much less glare they produce. Also, it is apparent that that they are casting much more light downward where it is needed than the old lamp.

The next problem - glare from a sodium-vapor wall-pack lamp on the Smith center 500 meters away. This photo was taken through a telescope at the Observatory. 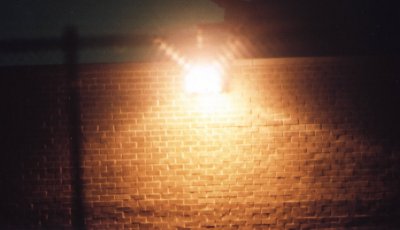 We installed a custom built aluminum shield to block direct light from this lamp from reaching the Observatory. 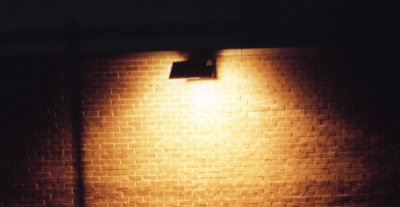 A photo taken with the same exposure as the one above. Our shield greatly reduced the glare while having no impact on the lamp's utility for area lighting.

Here is a deep exposure taken after the completion of our project. 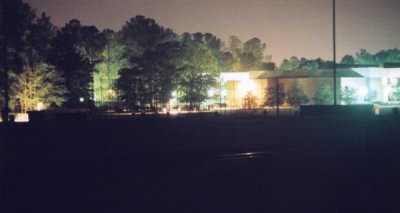 Although we reduced glare at the Observatory by about a factor of ten, this photo shows that substantial light is still apparent. Because the bright lights of the City of Florence are 8 miles away in this direction (and are apparent in the sky glow), elimination of the campus lighting apparent in this photo would not substantially improve our ability to do astronomy.