The Francis Marion University Planetarium opened its doors in 1978. Our first public show program was presented on January 29, 1978. At its heart was a Spitz System 512 Projector and could project a total of 2,354 stars, as well as several prominent galaxies and star clusters on a 33 foot dome. In 2000, with the passing of its first director, Mr. Ed Dooley, the planetarium was officially named, Dooley Planetarium.  You can learn more about Mr. Dooley by visiting our section devoted to him. The planetarium underwent a major upgrade to the fully digital planetarium system called Digistar 5 from Evans & Sutherland in 2014.

What is a Planetarium?

A planetarium is an enclosed room used to simulate the celestial sky. Before we accomplished with a star projector and other smaller projectors for the sun, moon, and visible planets. Now we have a fully digital planetarium system known as Digistar 5. With the digital system we are no longer confined to viewing just stars on the dome, we can now leave the surface of Earth, fly to the sun (or planets), and even leave the Milky Way Galaxy. We can still produce a star field and showcase the evening sky, but now we can truly demonstrate the difference in big city skies vs. the dark country side.

The planetarium is first and foremost a teaching instrument. We use it to show how the sky changes during the course of a day or even over a longer period of time. Schools from around the Pee Dee are encouraged to bring their students to us for a visit. We provide programming that highlights the science standards of South Carolina and are always will to assist with any difficult topics that are hard to simulate in the classroom.

What was changed in the 2016 renovation?

In 2015 the President of Francis Marion University provided funds to renovate the planetarium. We refer to this as Phase II. This time the planetarium chairs, carpet, and wall paint have all been changed. The seats and carpet were removed after 38 years of wear and tear. The new seats installed include a selection of various sizes to better accommodate visitors. Chairs that were badly positioned during the installation in 1978 have been removed and a row of seats was added to both sides of the auditorium. This changed the overall layout and reduced the number of permanent seats from 73 to 64. The wall color has also been changed to a grey tone to compliment the carpet and seat fabric. Phase II was completed on July 1, 2016.

What was changed in the 2014 renovation?

In 2014 ScienceSouth, Inc. and Francis Marion University were awarded a grant from NASA to host a series of programs called NASA Saturday in the Pee Dee. As part of the grant, FMU was sub-awarded monies to use for the renovation of the planetarium to a fully digital system, replace the lights around the dome, and upgrade the sound system to Stereo 5.1 surround. Gone from the center of the planetarium is the Spitz-512 star projector. In its place sits a metal platform and railing system around two HD projectors. The platform and was constructed by Severance Metal and Steel Fabricating, Inc. right here in Effingham, SC.

In the back room a new compute server system was installed which runs the Digistar 5 system. Out in the main room all you will see are two large monitors and a joystick. There is also a duplicate station in the back room which will serve as our Production Studio. We are very excited to show off the new features the digital system provides for us.

The lighting system around the dome was removed and replaced with the AstroFXAurora LED Lighting system from Bowen Technovation. They also upgraded our sound system by adding in a fifth speaker, relocating the subwofer, and adding an additional amplifier and new mixer. Their system also is integrated into the Digistar 5 system allowing us total control of the LED lights and sound during productions.

What type of star projector did we have? 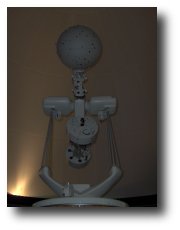 Our Planetarium featured a Spitz model 512 projector with 2354 stars up until November 2014. In the photo on the right, the large ball has many small holes through which a swinging light (not shown - it's inside the ball) shines through. This projects the star patterns that we see at night. The star projector also shows some stars in their true colors as seen in the night sky. It also projects other objects like a galaxy, open clusters and globular clusters. Now you can visit the star projector at the South Carolina State Museum in Columbia.

The colored cylinders in this photo are the gears for the planets and moon. Each of the objects has their own special path through the sky that must be maintained. There are small mirrors that reflect a small point of light up onto the dome for the planets. The moon's image is different as it is a picture of the real moon's face that changes to represent the different phases of the moon.

How big is the dome?

The dome is 33 feet in diameter, and reaches a height of 24 feet 4 inches above the floor. Closer inspection of the dome shows that it is made of panels that are fitted together. Each of these panels is part of a large welded structure that is suspended from the ceiling by 14 long chains. The panels all have small holes in them. This is important for many reasons: they allow air to circulate through the room, they reduce the weight of each panel, and allow speakers to be hung from behind the panels. We can seat 64 people in special reclining chairs under the dome, but also have 20 more chairs that can be set out if needed. Never fear about the dome moving, we have had large projectors mounted on platforms attached to the dome and it did not move an inch.